Nausea and vomiting are two major adverse events of anti-cancer drug treatment, and antiemetic therapy is a supportive care*1 for alleviating the agonizing symptoms which cancer patients receiving chemotherapy often experience. This newly-developed antiemetic therapy involves olanzapine (an antipsychotic drug), which has been proven as effective for controlling chemotherapy-induced nausea and vomiting but hasn’t been widely used due to the side effects including somnolence and lightheadedness. The research group achieved success in preventing these side effects by decreasing the dose and adjusting the dosage timing, and in obtaining higher continuous antiemetic effects than the conventional standard antiemetic therapy.

More precisely, for the complete vomit suppression rate, which is the most critical index for a study of nausea and vomiting, they achieved an improvement by 13% in the delayed phase (i.e. the period from day 2 to day 5 after the start of chemotherapy) for which the improvement had been the most highly needed.

It is expected that this new antiemetic therapy will be internationally recognized to be adopted as a new standard antiemetic therapy in the near future, as this study result has proven effectiveness of it for preventing nausea and vomiting, as well as for controlling olanzapine-induced somnolence and lightheadedness in the morning after.

This study has been supported by research funding of the Japan Supportive, Palliative and Psychosocial Oncology Group (J-SUPPORT), who has been committed to establish a permanent framework for multi-institutional collaborative clinical tests and clinical studies, and of the Project for Development of Innovative Research on Cancer Therapeutics (P-DIRECT) certified as “a research on development of cancer supportive care based on scientific evidences” by the Japan Agency for Medical Research and Development (AMED).

Summary of the J-FORCE clinical test

Among various chemotherapy-induced adverse events, nausea and vomiting are experienced by more than half of cancer patients receiving chemotherapy, and they may possibly prevent the patients from continuing or completing their treatments, which will inevitably impact on their prognoses. For instance, cisplatin, which is being used as a standard treatment for cancers in lung, esophagus and womb, has an emetogenic risk as high as 90%, and a patient will feel just like carsick for several days after starting taking it. Therefore, continuous control of nausea and vomiting is required in order to retain the quality of the patient’s life. However, with the current standard antiemetic therapy, about 90% of nausea and vomiting can be controlled but it will only be for the acute phase, 24 hours after the first dose. The efficacy rate after the 24 hours will go down as low as 65% in the delayed phase (from day 2 to day 5 after the first dose), which proves the high need of continuous antiemetic effect.

In this study, a drug called olanzapine (an atypical antipsychotic drug) featured by very limited adverse events while conventional antipsychotic drugs are typically associated with many of them, has been used. Various studies already proved antiemetic effects of olanzapine for chemotherapy-induced nausea and vomiting in cancer patients in the US and some other countries, and the efficacy was well-confirmed. However, most of them involved high dose (10 mg) of olanzapine and induced strong somnolence and lightheadedness, which didn’t provide enough evidence for its safety before being widely used in Europe and Japan.

There are two major features about this study: It involves olanzapine 5 mg, and the dosage timing is after dinner in the evening instead of before going to bed. It is because it takes 3 or 4 hours after taking olanzapine for the blood level to become the highest. This means that the patient will be asleep when somnolence, an olanzapine-induced side effect, becomes the strongest. This study design controlling somnolence and lightheadedness in the morning after has been very highly acclaimed internationally.

As this study was designed to compare the standard triple antiemetic therapy (involving serotonin receptor antagonist*2, neurokinin 1 receptor antagonist*3 and steroid) and the combination therapy with olanzapine 5 mg added to it, the patients were randomly divided into two groups, and provided with the therapies including placebo. Neither the patients themselves nor the nurses and doctors knew which group they belonged to. This is called a placebo-controlled double-blind phase III study and is supposed to be the best and the most scientific method when two therapies are compared to prove which one is better and more effective (refer to chart 1). 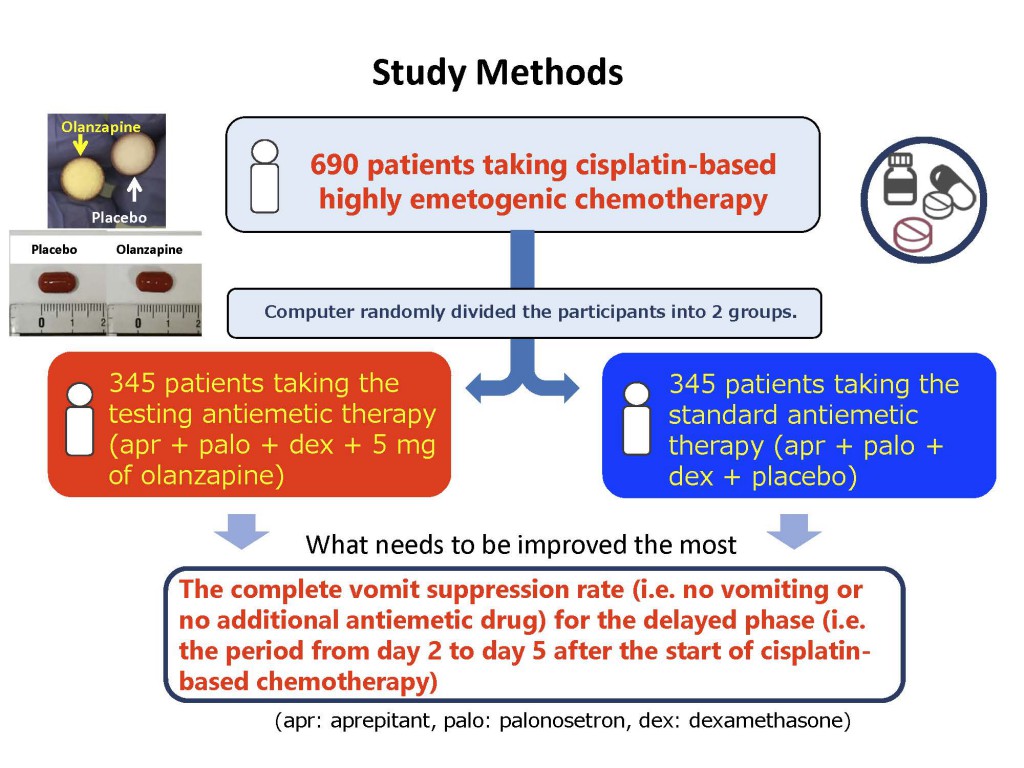 Each group, one involved olanzapine and the other involved placebo, was evaluated for the 3 indexes as shown in the table below for the acute phase, delayed phase and entire period (i.e. period covering acute and delayed phases both). What needed to be improved the most was the complete vomit suppression rate (complete response, CR) for the delayed phase, in which the study group had been keen to see the improvement.

In addition to evaluating the antiemetic effects, each patient participated in the study was asked to keep records in their symptom reports to tell if they had somnolence, which is a major adverse event of olanzapine, during the day, if they slept well during the night, and if their appetites were lowered or not (because olanzapine has an orexigenic effect).

In this study, 710 patients with lung, esophagus and womb cancers starting cisplatin-based chemotherapy for the first time in 30 medical institutions nationwide participated and cooperated.

Chart 2. Evaluation results of the efficacy 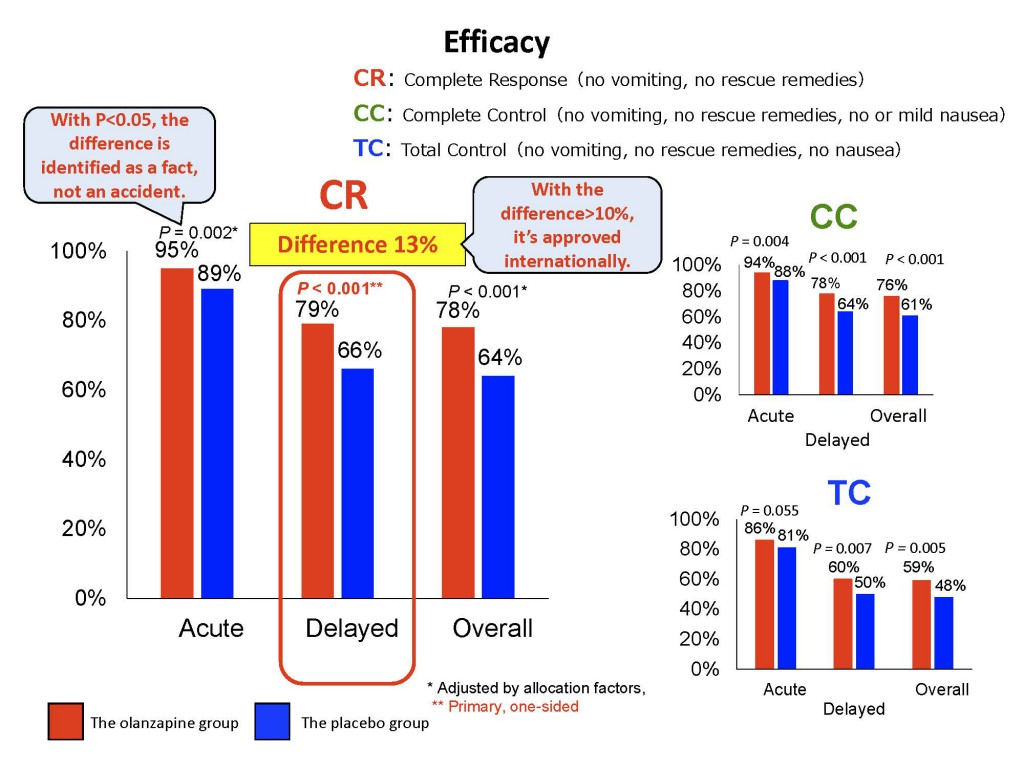 Chart 3. Incidence rates for “somnolence during the day,” “no asomnia” and “lowering of appetite” 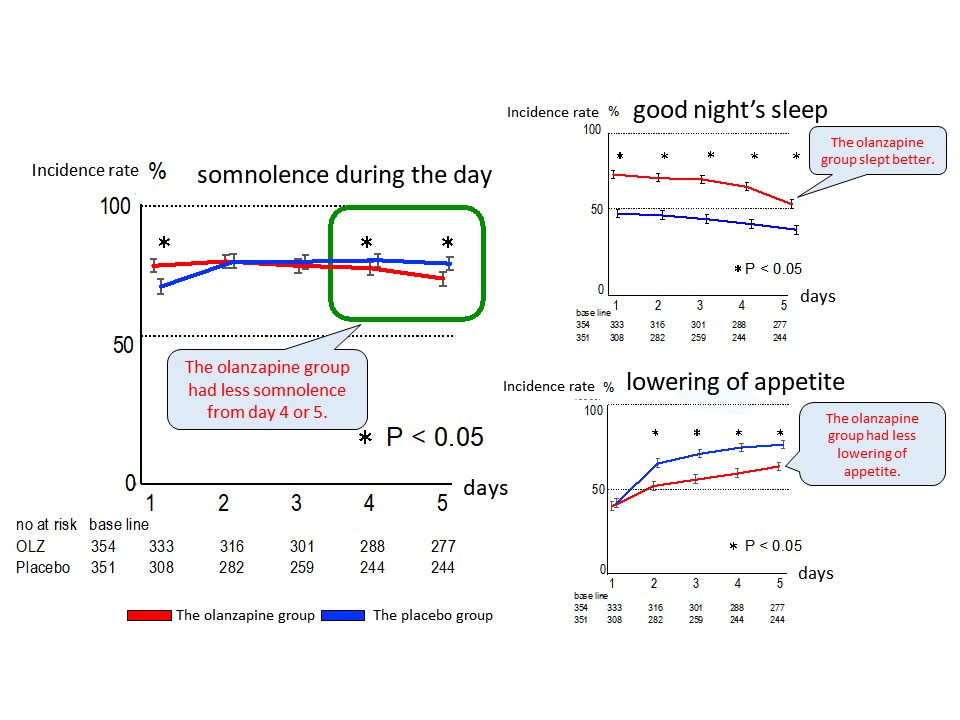 This study proved the antiemetic effect of olanzapine while preventing somnolence and lightheadedness during the day, and at the same time, suppressing nausea and vomiting in the delayed phase, when the improvement for the continuous antiemetic effect had been needed very badly. It is expected that this new therapy with olanzapine 5 mg in combination with the standard antiemetic therapy will be adopted in the international guidelines as a new standardized antiemetic therapy for cisplatin-based chemotherapy.

J-SUPPORT is a research organization with the development strategy in supportive care aiming at supporting researches in the field from developing to prevalence and implementation in the all-Japan system. It was established in February, 2016, with the funds for R & D of the NCC (27-A-3). The secretariat has been located at the Innovation Center for Supportive, Palliative and Psychosocial Care and the Center for Public Health Sciences in the NCCH since then.

They have had 60 research projects offered from all over Japan, and 12 of them have been approved as quality projects responding to unmet needs. This study is the first clinical trial among them with the evaluation results obtained from patients’ participation.

*1. Supportive care
Supportive care in cancer is the prevention, treatment and management of the adverse events, complications and after effects of cancer and its treatment. This includes management of physical and psychological symptoms and side effects across the continuum of the cancer experience from diagnosis through treatment to post-treatment care including rehabilitation and end-of-life care. Enhancing oral care and rehabilitation, secondary cancer prevention, survivorship, and end-of-life care are integral to supportive care.

Following febrile neutropenia (FN), one of chemotherapy-induced adverse events with high needs for managements, nausea and vomiting seem to be almost entirely brought under control with this new antiemetic therapy. However, there are still many other chemotherapy-induced adverse events, including numbness or fatigue, that are still in need of effective control therapies. Although the evaluation method for those adverse events highly relies on self-reported symptoms by the patients, the process for establishing symptom-control therapies has just started with a definition of each symptom.